Almost one and half years ago, the sister companies Nieuwstraten Metaalbewerking BV and Nieuwstraten Proefstaven BV each started working with a Mitsubishi Electric MV2400S Tubular. The machines were supplied by Dutch distributor Dymato. The machines are now so firmly established in everyday operations that they’ve become literally indispensable.

The history of Nieuwstraten BV founded in De Lier in the Netherlands goes back to 1929. The owner and Managing Director Nico Grondel explains: “My grandfather founded a smithy and repair shop in The Hague. Twelve years later, he added a new line of business which still plays a key role for us today, i.e. the production of test specimens. On behalf of manufacturers, insurers and firms of experts, we, as sworn and ISO-certified specialists, supply them to research centres, laboratories and testing institutes at home and abroad. Test specimens, such as tensile specimens, are needed among other things to check the strength of welded joints in pipes, pressurised vessels and bridge structures. The test specimens can be composed of different materials with or without welds and are subject to laboratory testing in a tensile testing machine. Nieuwstraten Proefstaven is authorised to overstamp the stamps of testing institutes.” 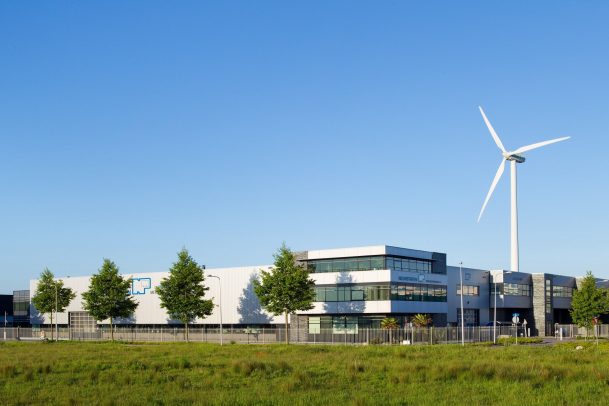 In 1990 Nieuwstraten Proefstaven BV founded a branch in Breda in the southern Netherlands. Three years later, it was joined by a sister company: Nieuwstraten Metaalbewerking BV, which evolved out of P. Mol Metaalbewerking BV. These two companies are situated on a single site in the town of De Lier not far from Rotterdam and Breda and occupy one of three locations, along with the above-mentioned branch in Breda and another that opened in Wommelgem in Belgium in 2017. “Nieuwstraten Metaalbewerking BV carries out conventional and CNCcontrolled milling, turning, drilling, tapping and key seating as well as, since a year and a half ago, wire EDM,” says Deputy Works Manager Wybrand Vis. “We not only machine all conceivable materials, ranging from aluminium, steel and stainless steel to bronze, Inconel and titanium, but also numerous types of plastics. Our customers include companies from the fields of plant and machine manufacture, precision mechanics, the building industry, research and development centres, hydraulics and pneumatics, the offshore industry, horticulture, the glass industry, automotive engineering, the food industry, packaging technology, electrical engineering and petrochemicals.”

According to Vis, Nieuwstraten Metaalbewerking BV is particularly known for its flexibility: “We make anything possible – from one-off items to series of several thousand units. Thanks to our rapid throughput, we can also take on rush jobs, which our customers much appreciate. If, for example, a ship is laid up in the port of Rotterdam because of a faulty part, this can easily cost EUR30,000 per day, so time is of the essence. In such situations, our employees are always willing to put in extra hours. This loyalty is a result of the positive atmosphere at work and the appreciation
that management shows to its staff.

“But flexibility is not the only factor that sets us apart from the competition. For the quality of our products is also very important to us, and we check quality closely in our own test room. Each product is examined in detail, with large series being randomly sampled.” The evolution of the two companies finds expression in the growth in the workforce: while it was only 6 to 7 at the beginning of the Nineties, there are now 35 people working for Nieuwstraten Metaalbewerking BV and – distributed among the company’s two locations – 30 at Nieuwstraten Proefstaven BV. 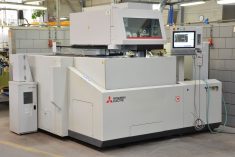 In the second half of 2015, the management of Nieuwstraten BV decided to invest in a new wire-cutting machine for each of the two locations. Peter Schulte, Works Manager of Nieuwstraten Metaalbewerking BV, cites the reasons for choosing the Mitsubishi Electric MV2400S Tubular with direct drive, ODS (Optical Drive System) and automatic wire threader (AT): “We contacted a number of reference companies who told us of their positive experience with this machine. The ratio of price to quality was outstanding for the machine from Mitsubishi Electric, but no less important were our agreeable dealings with the distributor Dymato whose frank and friendly employees never yielded to the temptation to make arrogant or derogatory remarks about rival products. The after-sales service has also proved to be excellent.”

Roy Eversteijn, who regularly works with the MV2400S Tubular, can only confirm the last point: “With three other colleagues, I underwent comprehensive three-day training by Dymato on our premises to learn how to make best use of the machine. With a little experience in this area, we soon had a firm grasp of programming, but the practical examples were really very helpful. We can now always refer back to them, so we can quickly learn more in our daily work. At the beginning particularly, we contacted Dymato by phone with questions a number of times, and we got answers always on the same day, so there were no delays in our work on site.”

“In my view, the machine from Mitsubishi Electric is easy to operate and runs very reliably as long it is properly maintained – by this I mean above all regular cleaning. With the aid of our Teamviewer app, I can remote-control a number of functions from home via my smartphone when the machine continues running in the evenings unsupervised.” 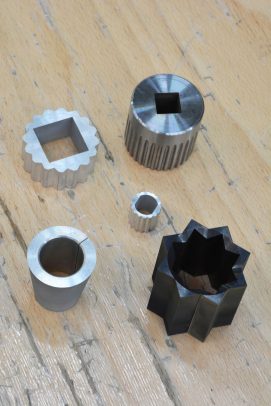 At Nieuwstraten Metaalbewerking BV, the Mitsubishi Electric MV2400S Tubular is in operation for a total of a week per month on average. Vis explains how it used: “The machine enables us among other things to cut square holes into workpieces using the thinnest, 0.15 mm diameter wire – even at an angle if necessary. We’d never be able to accomplish such acute angles by milling. Keyways in long bushings we now produce in a single cycle – without the need for machining from two sides with the associated risk of reduced accuracy of fit. The machine from Mitsubishi Electric is also ideal for the production of rings with a minimal gap width.”

According to the owner and managing director Grondel, customers are only gradually discovering what’s possible with the machine: “They think increasingly about the machining steps that can be performed with this machine. We notice that the number of wire-cutting jobs is constantly increasing – for instance, for the production of coupling pieces for the extension of drive shafts. This is where the square holes prevent unwanted rotation.” At Nieuwstraten Proefstaven BV, the Mitsubishi Electric MV2400S Tubular has become no less indispensable. Grondel comments: “The machine came at just the right time. To be honest, we wouldn’t be about to do without it. Because of the rising demands, clip cages – these are grooves for the mounting of measuring instruments – now have a highly complicated shape with different angles. Without the wire-cutting machine, we wouldn’t be able to machine them at all.”